Skip to Main Content
What are you looking for?

Dinosaurs are a group of reptiles that ruled the Earth during the Mesozoic Era, 252 to 66 million years ago. As a group, dinosaurs are some of the most successful animals the world has ever known, thriving on every continent and in every kind of habitat. Although most dinosaurs are now extinct, one kind – birds – is still with us today.

During the Mesozoic, many kinds of dinosaurs evolved and went extinct. Dinosaur Park preserves one particular dinosaur ecosystem that existed in Maryland 110 million years ago. However, these dinosaurs did not live alone. They shared their world with a variety of other animals, including crocodiles, insects, and fish. Our own distant ancestors – small, shrew-like mammals – also lived in the shadow of the dinosaurs. 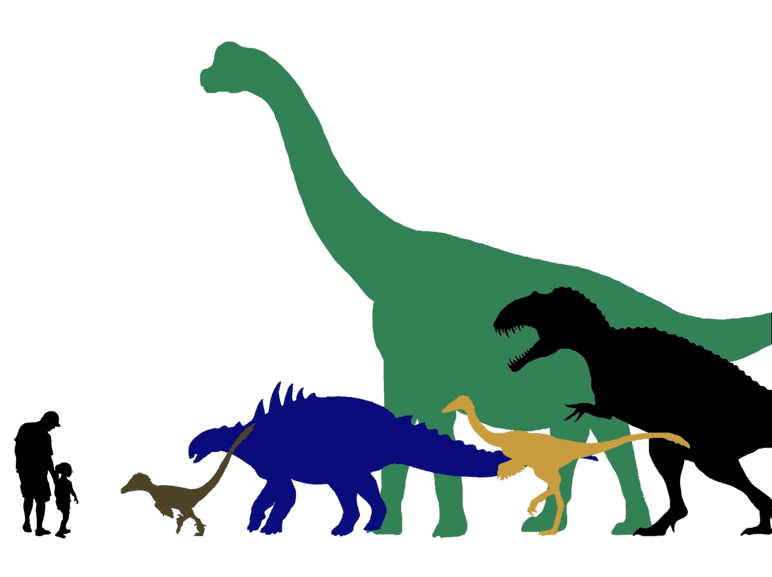 Astrodon was a member of the group of long-necked dinosaurs called sauropods. A plant eater, Astrodon was related to Brachiosaurus, which lived about 40 million years earlier. Although an adult Astrodon may have exceeded 60 feet in length, most sauropod fossils found at Dinosaur Park come from juveniles. The name Astrodon means “star tooth,” because its teeth have a star-like shape in cross-section. Named in 1858, Astrodon was the first sauropod discovered in North America, and the second American dinosaur to be scientifically described. Astrodon became the Maryland State Dinosaur in 1998.

Ornithomimids were feathered dinosaurs with small heads and narrow, toothless snouts. They strongly resembled modern ostriches, and they probably lived in much the same way, feeding on seeds, fruits, and possibly insects or other small animals. New research suggests that two different ornithomimid species lived in Maryland 110 million years ago.

Priconodon was a low-built and stocky herbivore belonging to a group called nodosaurs. Along with their cousins the ankylosaurs, nodosaurs were among the most well-armored animals ever. Their backs, legs, and tails were studded with bony knobs and spikes, which were embedded in their skin. Nodosaur heads had built-in helmets, made from outgrowths of bone from the skull itself. Priconodon and its kin apparently preferred watery habitats, like hippos today.

A small number of teeth and bones from a giant meat eating dinosaur have been found at Dinosaur Park. This predator was probably a relative of Acrocanthosaurus  from Texas and Oklahoma. The 35 foot-long Acrocanthosaurus  may have hunted sauropod dinosaurs, such as Astrodon.

Dromaeosaurs (commonly called “raptors”) were a group of small meat eating dinosaurs with large, hooked claws on each foot. They were swift and agile hunters, using a long, stiffened tail as a counterbalance when running. Dromaeosaurs are very closely related to modern birds. Dromaeosaur fossils from China have been found with feathers, and their Maryland relatives were certainly feathered as well.