From the 17th century until today, African-Americans have been integral to the founding and development of Prince George's County. Active in the Revolutionary and Civil Wars, African-Americans served as soldiers and aided the nation while simultaneously laying the foundation for the historically African-American communities that exist today.

Researching African American ancestors is a difficult task prior to 1865, as few records list family names of people who were enslaved. Finding the name of the slave owner can lead to probate, deed, and will records that may include information on first names, sometimes surnames and possibly family associations of the enslaved. Locating information on free African Americans is also challenging as they were denied land ownership and census takers would sometimes overlook these families. The following story highlights the struggles of a group of enslaved laborers in Brandywine who were promised their freedom by their owner, John Townshend, but who were denied that freedom through a nine-year court battle with his heirs.

The tombstone of John Townshend sits propped against a tree on land now owned by The Maryland-National Capital Park and Planning Commission in Brandywine. The inscription on the tombstone, which Townshend supposedly wrote himself, reads: 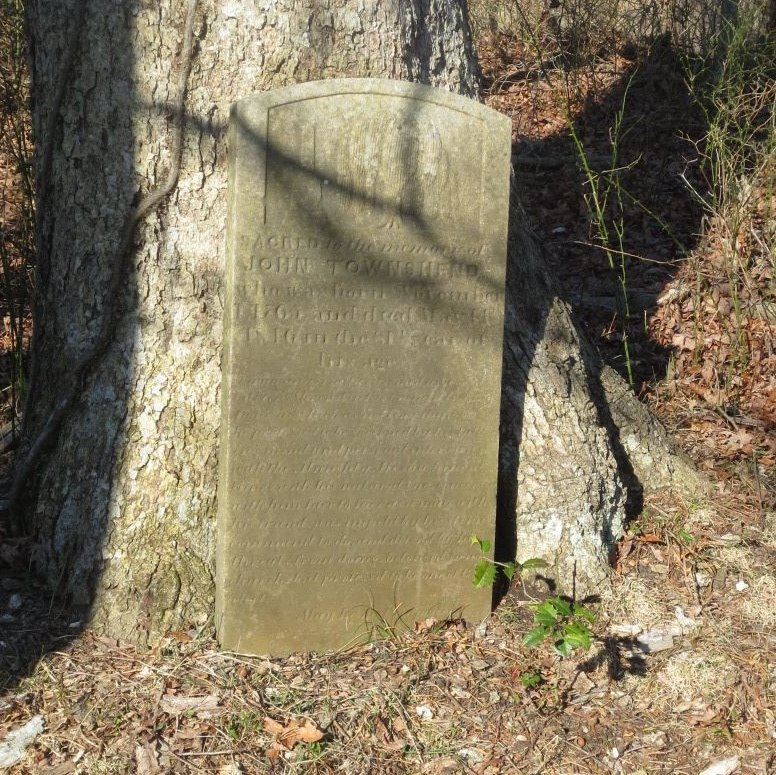 “Sacred to the memory of John Townshend who was born November 1, 1765 and died May 14, 1846 in the 81st year of his age. A man universally esteemed as a good citizen. Shrewd in his business transactions, in which as in everything else, he professed to be governed by his talking mind and personal interviews with the Almighty. He saw Him at times with his natural eye, conversed with him face to face as a man to a friend, was impeld [sic] by stern command to do, and deterred by His threats from doing. Belonging to no church, but professed to be one of God’s elect. May he rest in peace!”

John Townshend was the owner of a large tobacco plantation in southern Prince George’s County. What happened to John Townshend’s estate after his death was the subject of the first class-action lawsuit in Maryland. John Townshend acquired a large amount of land and several enslaved laborers from the estate of his father, Samuel Townshend. He added several other adjoining tracts of land to his holdings over the years and the number of enslaved laborers on his plantation increased from 13 to 18 between 1810 and 1820.

As noted on his tombstone, John Townshend believed that he was able to talk directly to God and became troubled by his ownership of slaves. On Christmas Eve 1831, John Townsend executed a Deed of Manumission, stating that after his death, all his slaves, whose names and ages he listed and thirty-four in number, were to be “released from slavery, liberated, manumitted and set free and discharged from all manner of servitude or service to me, my executors or administrators forever,” including the children of the listed slaves. The 1840 federal census lists 36 enslaved laborers in the possession of John Townshend.

On September 17, 1844, John Townshend executed a deed between himself and “Negro Let and several other Negroes and their increase particularly mentioned in a certain Deed of Manumission heretofore executed by the said John Townshend and recorded in Liber AB 7 page 128, one of the Land Records of Prince George’s County.” By this deed, Townshend conveyed all his real and personal property which he might own at the time of his death, to his enslaved laborers. It was his stated intention that his slaves were to have whatever remained of his property after all his debts and expenses were paid. Townshend executed another Deed of Manumission on February 6, 1846, shortly before his death, in which he once again listed the 49 enslaved laborers in his possession at that time, stating that it was his desire that they be freed after his death.

John Townshend died on May 14, 1846 and his nephew, Jeremiah Townshend, was appointed the administrator of his estate. John’s enslaved laborers, no doubt, were aware of the deeds of manumission and deed of personal and real property that had been executed by him. Jeremiah Townshend and John’s other heirs filed petitions in the Orphan’s Court of Prince George’s County, and later in the Circuit Court for Prince George’s County claiming that since 1794, John had been insane. This despite John’s ability to acquire additional land over the years and manage an estate that was valued at $16,997.40 at the time of his death. Jeremiah Townshend was successful in having his uncle’s will declared null and void. However, in 1847, two of the slaves named in the deed of manumission, Jerry and Anthony, petitioned the court for their freedom.

After numerous appeals over nine years in the court system, the Court of Appeals ruled against the enslaved laborers and in favor of Jeremiah Townshend in 1857. John Townshend’s enslaved laborers would have to wait another eight years for the freedom that had been promised to them by their owner.

The National Trust for Historic Preservation recently launched a new program to assist in sharing the history of African American activism and achievement. To find out more information about the Action Fund and how to apply for a grant ranging from $50,000 to $150,000 visit the website.